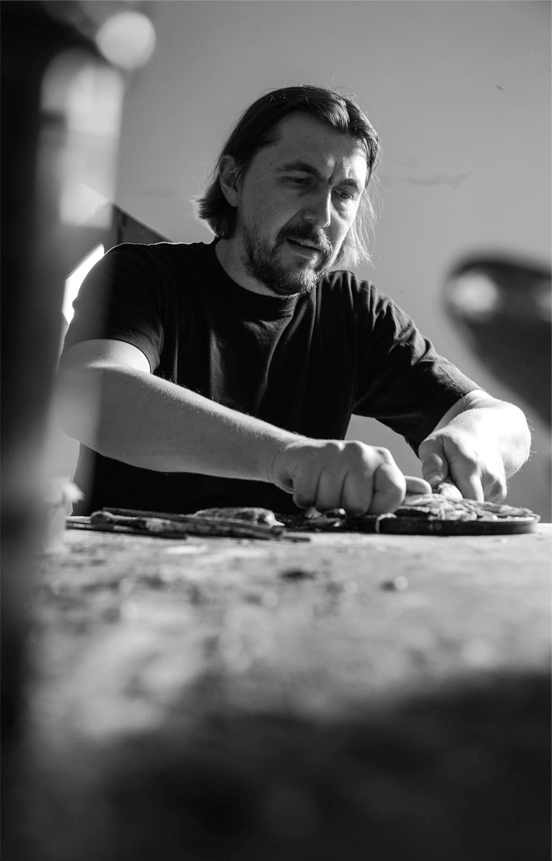 Hromec’s art might, at first, seem more like a chemical reaction than a painting. Sweeping paint strokes sputter across each other, colliding and twisting apart again. A mark from what could only have been a circular sander wanders its way into the chaos, eating away layers of paint and revealing a gleaming aluminum canvas underneath. The once pristine surface, now marred with scratches and splatters, has layers of intense color and texture so intricately combined that is it impossible to determine the order in which they were created. Rather than a discernable image, his works seem like an ambiguous record of actions. They evoke curiosity and create within the viewer a desire to understand the piece, both as a physical creation and as an insight into the symbolism of the human hand.
Gestural images of hands are stamped over each of his pieces. The hands reveal a human aspect of the work, and the subtle gestures bring forth emotional qualities hidden within the metal and paint. They also seem to remind the viewer that the layers beneath are the result of human hands. What might otherwise be viewed as the outcome of an industrial process, or an accidental series of actions, can instead be seen as a delicate interplay of human decisions.

Hromec’s Hands of Light allow viewers to immerse themselves in reflective thought. His unique combination of gestures, actions, and symbolism cause us to pause, and allow us to relate to the actions that take place in our own lives.